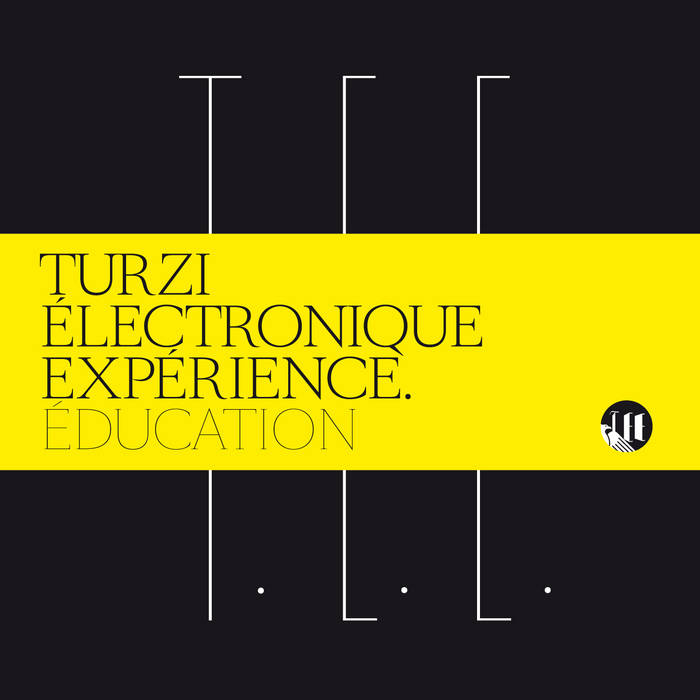 After A and B, it was not too far-fetched to assume the next offering by TURZI would be C. But no. Education is actually the continuation, not of A and B, but of Turzi's first, pre-alphabetical album, Made Under Authority, released in 2006. That first album had been recorded essentially by a young Romain Turzi, then still a student, alone in the kitchen of his small flat Rue Biot, before he put together a band that would back him on his subsequent gigs and records. There, he shared for the first time his vision of continental rock, the music that fascinated him and fashioned his musical identity. Critics and public alike labelled him krautrock and thought no further. It was in 2000 that Romain Turzi took the stage alone for the first time, under the moniker TURZI ÉLECTRONIQUE EXPÉRIENCE. His studies were now over and so was his education. That night was also the first appearance of a modern piece of hardware in his equipment: the Yamaha Tenori-On, which had been made available a few short months before, and which allowed him to control as many synths as he had fingers on each hand. This small-scaled digital revolution in the palette of a musician often described as an analog conservative would not stop there. When he encountered a cheap Yamaha DX-27 in a street fair, he started becoming enticed by digital sounds and by MIDI technology, a weapon of mass construction that had so far been prohibited from his arsenal. Little by little, Yamaha would replace Roland in the heart of the musician. As well as the musician, the music fan grew. His take on music became revisionary : half revisionist, half visionary. He realizes then that his education was far from being over. He understands that 80s digital Tangerine Dream is far more charming than their 70s analog output, that Jean-Michel Jarre's Zoolook and Revolution are more rewarding than the worn-out Oxygène and Equinoxe, that Gainsbarre knows better than Gainsbourg. But mostly he sees how the line that binds these artists' oeuvres is more interesting than the oeuvres themselves. Five years after Made Under Authority, Romain Turzi does not approach European music the same way he once did. Like a student starting his post-grad course, his vision reaches further, no longer synchronic but diachronic. In his personal pantheon, the Romanian Michael Cretu (of Enigma fame) or KLF's cult album 'Chill Out' now stand shoulder to shoulder with officially recognized maestros like Morricone or Kraftwerk. You will hear these influences in Education. Romain Turzi has always known that krautrock and French psych, to which he's been compared half to death, were not born in 68 and did not die in 77 : they don't belong in history class but in philosophy. He's understood that the underground is where the seeds belong, but that seeds are to grow, bloom, and bear fruits. A true artist, Romain Turzi once again broke free from his own codes. Instead of blinding us with science, he went for the unknown. From disciplinary rock he moved on to revisionary electronics. Turzi's Electronic Experience is set on educating the listener, transmit the process he himself went through, get him out of his intellectual comfort zone. It was already the case with Made Under Authority, then seen as an anomaly, before 'krautrock' became everybody's favourite buzzword – and, in fact, his path is similar to what the prime krautrockers themselves did, like Can embracing reggae or Kraftwerk going techno-pop under the influence of François Kevorkian, both propositions being ill-received in their time. The François K of Education is PILOOSKI, well known for his edits of pre-existing tracks, making them more danceable and to the point. The same process was used on Turzi's tracks, sometimes too long or unfocused : coming straight from club culture, unlike Romain who'd sooner play music sitting down in his home than dancing in a club, Pilooski moved the cursor from layers of arrangements to the core of the songs, and provided them with the directness that will allow them to speak to the body as well as the mind.


In this album, Romain put everything he had in him, everything he'd lived before he started recording, things he probably could not have expressed before.
Made Under Authority was a photograph of the very instant when the songs were conceived, created and recorded, Education is a narrative, the portrait of an artist from birth to fatherhood. THREE MAJORS :

ENFANCE (“childhood”) is the guitar track of Education, the most romantic one, the most 90s-sounding (age 10 to 19 for Romain), and certainly a key-track of the album. For his most personal album to date, he reached back to his childhood spent in Versailles, under the shadows of the Saint-Louis Cathedral. Religion is mentioned in this record like it was in each of the previous three, treated with distance and deference, like it often is by young artists, be them Joyce or Scorsese, who grew up in faith and associate it with childhood, and for whom the first adolescent unholy thoughts feel like a painful denial. The lyrics are laconic yet eloquent : Birth – Childhood – Conscience – Obedience – Adolescence – Abstinence – Romance – Concurrence – Empire of the senses – Disobedience – Tenderness – Niceness – Politeness – Confession – Pregnancy – Happiness – Goddess.

CROYANCE (“belief”) is the one track that links Education to A and B. It is the one that shows that under the digital wrapping lies the very same genome. It could have been named CONSTANCE (“consistency”) but the choice of that title seems to indicate that for Romain Turzi, consistency means never denying what you once believed in.

ERRANCE (“drifting”) – Every song on every Turzi album so far has kind of drifted, but this one is a major turning point in his career: it is the very first song written in a major key. In four albums, it is quite remarkable.

EN FRANCE ends the album by evoking Romain's drifting through France. It mixes the baroque of the old Versailles he grew up in with the sounds and rhythm from Les Antilles heard everywhere in the neighborhood he now lives in, the 18th arrondissement of Paris. Anyone who's been to Versailles knows that leaving it is like leaving history behind. Connaissance, Croyance, Constance, Enfance, Déviance, Errance, Descendance, En France. The rest is silence.

Romain Turzi is the leader of the band. Hailing from Versailles, his youth was fuelled by experimentation. Hours spent in bedrooms surrounded by synthesizers matched by violently fierce live shows around Paris.

Bandcamp Daily  your guide to the world of Bandcamp